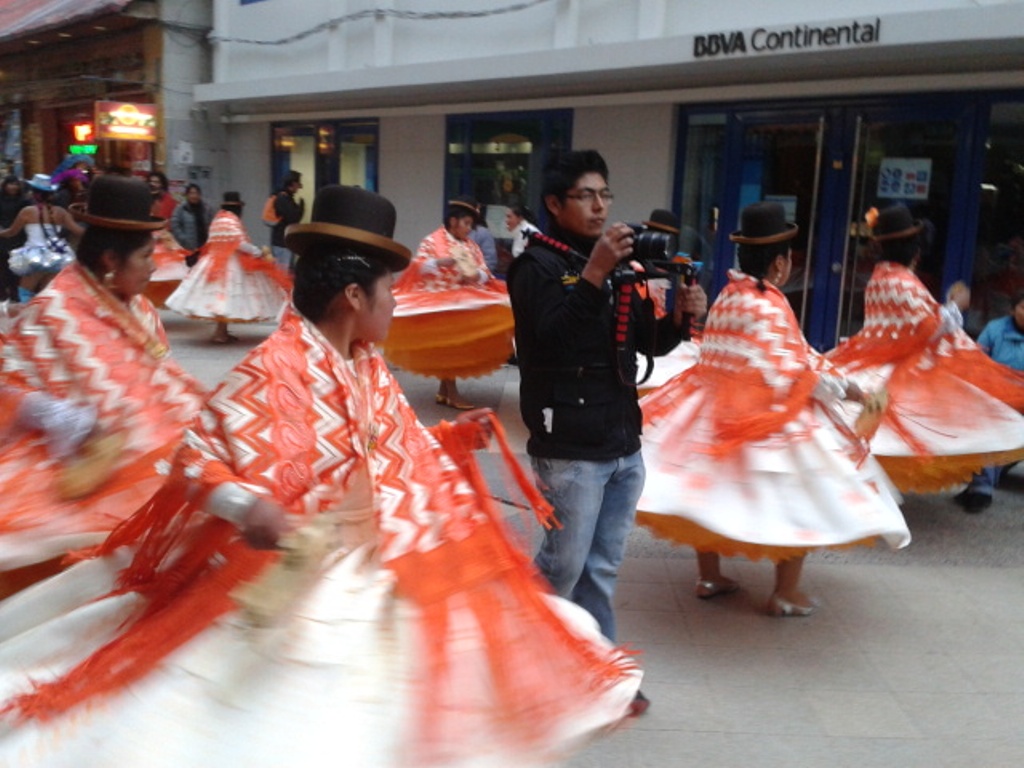 Have you ever wondered just how far your language GCSE will get you in the wild? I set out to road-test my dusty Spanish qualification last year by travelling through Chile, Peru, and Bolivia, sometimes alone and sometimes with fellow English speakers, with a short stop-off as a classroom assistant in darkest Peru.

My (lack of) knowledge of Spanish soon became más claro on the tarmac at Madrid, when I shuffled down the transatlantic plane and asked the man sitting in my row whether this was indeed seat J21.

“íSí – jota veintiuno!” I said back to him joyfully.

“No, no – jjjjjjjjjjjjjota,” he repeated with an elaborate flourish of a hand gesture. “Con jjjjj. Jjjjjjjota veintiuno.”

“Jjjjjjjota veintiuno,” I said carefully, and his face lit up in delight. At this point I realized that I was holding up an entire Airbus A340 due to my impromptu Spanish lesson, but this didn’t seem to matter to the hundreds of passengers waiting in line behind me, who just smiled con mucha paciencia (with patience being an essential quality, I found, for life in Latin America).

I soon discovered that whoever I spoke to, from doting waiters in Santiago’s trendy Bellavista quarter to the children who washed our dishes in the stream in the middle of Peru’s Cordillera Blanca mountain range, the South Americans seemed encantados at any attempt by a gringa to speak their language, however unsuccessful.

For example, “Hola – ” I began in a jewellery shop in Nazca.

“Oh – I can’t really speak it very well. I only know a little bit.”

I suddenly realized that I was actually speaking Italian, so tried to switch.

“Er… I looking hang things with… ears. Have?”

The shopkeeper, who had been smiling and nodding politely, burst out with:

“But you are so good, señorita! You speak so beautifully! Where are you from?” – a delightfully disarming kind of flattery which was employed everywhere I went from the silent, snow-dusted peaks of Patagonia to the starry, dry deserts of the Atacama, and the eerie early morning mists of Machu Picchu.

However, we did struggle with the language at first on landing at Santiago. The Australians had been given a free phrase book at the airport which contained helpful sentences such as “Darling, aren’t the bedsheets, pillows, and bath towels wonderfully crisp?” and “For my wife, a small glass of wit.” The British attempted European Spanish with limited results. “¿Un bocadillo?” replied a confused local in a sandwich shop (in Chile, it means speech bubble). And as for the accent – Chileans apparently had serious issues with the letter “s”, which they seemed to snub every time it appeared (“¡Hatta mañana!”), only to fiendishly reintroduce it elsewhere in place of the Iberian “th” (“Thinco…” I began automatically, to be told in no uncertain terms, “Sinco! Sinco! You’re in Latin America now!”) To my untrained ear, the rapid-fire rattles between Chileans up and down the strip of a country may as well have been in Japanese.

Landing in Lima, however, was like travelling from the Outer Hebrides to the Home Counties (at least linguistically, not aesthetically): the Peruvians spoke with a gentle singsong clarity and a smile. But when I asked for the amazing fresh strawberry juice I’d sampled in Chile, a jugo de frutilla, they looked mystified. “Do you mean a jugo de fresa? We don’t say frutilla here.” And in Bolivia, asking for a jugo de fresa got me nowhere. “Don’t you mean a zumo de fresa…?”

This is because Spanish comes in many different flavours – or indeed, flavors. For starters, there were all the transatlantic variants of what we’d learned at school, such as carro for car, computadora for computer, and papa for the indigenous potato, one of Latin America’s best-known exports (“There are more than 3,000 varieties of potato in Peru!” they told us in the market at Arequipa; by the time we reached Cusco four days later, this had risen impressively to “more than 4,000 varieties”) – not to mention regional variants within Latin America itself. “Dónde está el baño?” worked perfectly well in Chile, for example, but didn’t pass muster in Peru where all the toilets were marked “S.S.H.H.” for “servicios higiénicos”.

Then there were all the words originating in Latin America which have crossed the Atlantic in the years since I did my GCSE:  a Peruvian family showed us their quínoa plants in the back garden, we stopped off in Pisco to drink the fiery brandy of the same name, chewed coca leaves at altitude (like getting an anaesthetic at the dentist’s), and made ceviche together in a family house (Peru’s signature dish of marinated raw fish, tantalisingly delicious).

However, I met far more brand new words than I’d bargained for, particularly when I got thirsty: from mote con huesillo (an ultra-Chilean peach nectar and wheat combination) to the nightmarishly yellow favourite of Peruvian schoolchildren, Inca Kola, and “explosive” mate (an infusion of coca and mint leaves, among other herbs). Even modest family kitchens in the middle of apparent nowhere offered us dazzling displays of fruity concoctions from colca sour (green) and limonada peruana (pale yellow) to chilcano (pink) and chicha morada (purple). Many of these drinks were blends of a bewildering range of odd-looking fruit that I could barely spell as we hurried round a Chilean market (“What’s this?” “¡Chirimoya!” – “And this?” “¡Lúcuma!” – “And these?” “¡Aguaymanto! ¡Maca! ¡Sancoya! ¡Rocoto!”). And of course, there were words I’d seen in guidebooks but not, until then, on menus:  roast llama (chewy, but nice enough), grilled alpaca (better), and that beloved dish of the Andes, splayed guinea pig (cuy) on a plate (very tasty indeed).

Latin America, before the Latin

The words llama and alpaca can be traced back to two of the most widely-spoken indigenous languages, Quechuan and Aymaran respectively. Our Peruvian guide, Alfredo, told me that ¿Llama? was what the Quechuan people echoed back to the first Spanish arrivals who pointed at the animal and asked: “¿Cómo se llama?”  (However, this tale was relayed after a few pisco sours, so may not be true.)

Spanish isn’t actually the mother tongue of many Peruvians. In the high school in Huaraz, surrounded by lake-and-mountain scenery that defied description, I watched some of the teenagers struggle to spell even fairly simple Spanish words: mixing up the letters “b” and “v”, for example, happened quite a lot.

“First of all, how do you spell “bailamos”?” I asked a boy called Jhon (yes – you read that right) curiously as he wrote “vailamos = ¿we dances?” with a hopeful look on his face.

“These kids all speak Quechuan at home,” explained Carmen, the local English teacher with patience as infinite as Mount Huascarán, the nearby nevado, was high. However, that fact didn’t in itself explain the accepted ambiguity of “b” and “v” which often seemed to be interchangeable in the local cafés, like identical twins playing pranks, as they competed to offer the best ceviche – or cebiche – in town.

The old and the new

The Quechuan language (or, strictly speaking, language family: there are several dialects) is a very old tongue, with a few faint etymological echoes in English in words like coca, condor, or the dried meat sense of jerky. It also has some wonderfully useful features: there are two versions of “we”, for example, which can either include or exclude the person being spoken to – quite a handy concept. And Quechuan traditions, such as el chamanismo, are very much still interwoven with everyday life in Peru: we saw shaman stalls where llama foetuses hung next to bleeding heart Catholic icons, as well as roadside restaurants offering the traditional pachamanca way of cooking food between hot stones, along with free Wi-Fi. Later in December, in the middle of a blazing hot afternoon on the edge of Lake Titicaca, I was sitting on the grass holding a skein of shocking pink wool for an elderly Quechuan lady who rattled away in her own language to our guide, Hugo, who interpreted it into Spanish and relayed it to me. (I decided against asking Hugo for a jugo.)

“¡Hola abuela!” called a teenage girl, wearing the traditional local costume in all the colours of the rainbow, and holding a mobile phone.

“How many grandchildren do you have?” I asked the elderly woman, via my interpreter. The old woman’s face changed.

People did address each other more formally than in Britain, although their actions were far less formal. “¡Profesoras! ¡Profesoras!” was a common cry as Carmen and I walked slowly across the playground in Huaraz, stopping every few seconds for hug-and-kiss rituals with the students. In shops, everyone called me “¡Señorita!” (thank you) or “¡Amiga!” with the occasional shout of gringa (fair enough), while people we lived next door to would wave cheerily in the street, “¡Hola vecina!”

So: did the humble GCSE pass the test? Well, after several weeks in a Peruvian classroom with teenagers who adored America (“Selena Gomez!”), hated neighbouring Chile (“NOOOO!!”), and knew very little about Britain (“La Juanita comes from a country in Europe where they speak English.” – “Italy?”) except for our musical exports, I was just about able to help with the urgent task of translating the lyrics of Price Tag:

“It’s about…money is not important. Love is more important!”

My proudest moment, however, came in a scenario that could have been lifted straight out of a GCSE coursebook. Towards the end of my stay, I walked into another jewellery shop and the assistant called over the manager, who started to explain the prices of her beautiful Incan necklaces in hesitant English.

“Oh no, it’s OK, you can speak normally to her,” said the assistant. We reverted to Spanish. I bought the necklace. GCSE, you have passed the test – with a little help from some amigos.

This article was originally published as Loving Latin on the Oxford Dictionaries blog, OxfordWords, on May 16, 2014