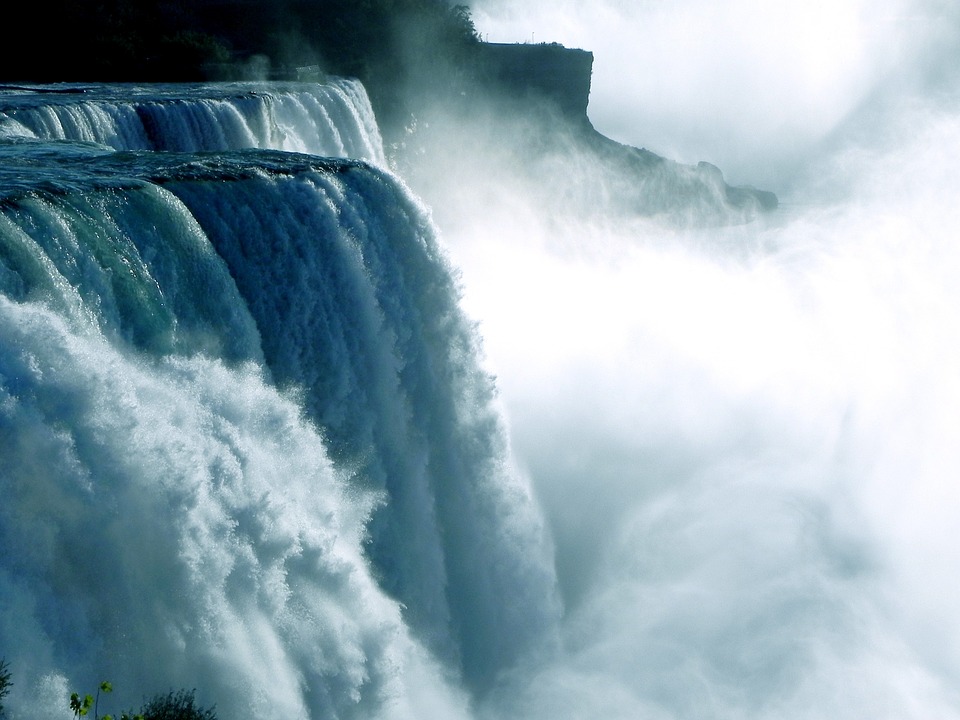 Little Micky is singing a muffled Jingle Bells through her scarf as we finally pull off the highway in Niagara Falls, Ontario (pop: 78,000) after three hours of inky darkness. Then she changes the lyrics to Dunkin’ Donuts. Micky is adorably cute.

“Thanks to God, we make it in good time,” says Mr Chang from the front, blessing himself quickly.

“Michaela,” says his wife, snaking rosary beads through her twice-gloved fingers, “Why you not sing something nice about the baby Jesus?”

“Niagara not far, ah?” says Mr Chang, turning to me and my boyfriend. “We blessed to live so close.”

Close? We’ve been trawling through a vast expanse of frozen emptiness since six this morning with my boyfriend’s two young cousins and their parents. Sometimes, as someone else’s dawn glowed on the slight curve of the horizon, the road ahead looked so static I wasn’t sure if we were travelling or standing still, lost.

The kids burst out and head straight for the nearest glassy puddle. I take a deep breath, and choke. It’s like inhaling icicles.

“Hey, you seen that movie Rumble in the Bronx?” shouts Tom, as he aims a Kung Fu kick at his baby sister and falls flat on his face.

Tom and Micky’s parents are Malaysian immigrants, and ethnically Chinese. There are so many Chinese in Toronto they spill into seven steamy, sizzling Chinatowns, brewing, barbecuing, and bickering in loud voices about which of them is the coldest. Yesterday, I drifted round disorientated, unable to decipher. For the first time in my life, I found myself in a minority.

“Watch me!” Micky calls before executing a flawless figure of eight. We applaud with woolly claps, and she smiles from several angles at her reflection in the ice.

Soon, we’re crowding around a table, with hot ginger teas and thawing fingers over an almost imperceptible rumbling bass. I’m not sure whether I’m hearing it aloud, or feeling it in my bones.

“Aren’t you a little cutie?” says a passing waitress in moose antlers. Micky smiles at herself in a teaspoon. Mrs Chang is sliding into Cantonese and the tiny grandmother is busy looking in her cookie for a fortune when “Hey!” says Tom, jumping out of his seat. “Dad dad dad! Look at the tea! The tea is moving! The tea is moving!”

It’s true. The surface of the tea is shimmering slightly.

“Have you seen Jurassic Park the movie?” continues Tom, “You know, when they’re in the jeep – and the water – “

“Thomas,” says Mr Chang, “Time to go,” and we tumble back out into the shock of the cold, ginger tea trailing fire down my throat. The rumble is louder.

“Hey,” says Tom, “Have you seen James Bond the movie?” He pulls out an imaginary pistol, shoots from the hip (“Thomas!” calls Mrs Chang), and punches the air in delight. Then he asks me, quietly, “Are you a Bond girl?”

We head out along a cliff edge on a silvery path, flecked with frost. Over the low growl of thunder ahead, Micky is singing in a little bell-like voice. I don’t fully understand the words.

“You speak French?” I ask, astonished.

“Sure do,” says the little girl brightly, “And can you guess what? No – it’s a secret.”

“I like it,” she whispers, and breaks into song again, but as we turn the corner her voice is drowned out by wide sheets of crashing water, falling into frothing torrents with prehistoric force. Splashes of ice land on my cheeks. Micky stops singing and lets go of my hand. Or maybe not: the roar whites everything out. My ears burn. My eyelashes freeze. The noise is tremendous. How can the earth not crack and break under the weight?

Tom suddenly makes an exuberant leap for the railing but his mom steadies him.

“Thomas! That for your protection, sweetheart.”

“Protection!” says Tom, whipping round to us. “Hey, have you guys seen that movie Austin Powers? The one where she says – ”

Mr Chang turns sharply to his son, who is in full flow.

“Thomas!” interrupts his dad. “We discuss this before!”

“But I haven’t got to the punchline!” wails Tom.

“Thomas,” warns his mother. I see her scrabbling for her rosary beads.

“This movie is banned!” snaps Mr Chang. “All movies are banned!”

We watch the water fall spectacularly, and wait.

Then I feel a little tugging on my sleeve.

“Did I say something wrong?” asks Micky, wide-eyed, as the tiny grandmother is hooting into her hands with laughter.

We have to laugh with her – even mom and dad. Sometimes things move in mysterious ways: the snowflakes, now beginning to fall in a shimmer; Micky’s scarf, trailing in the ice-cold spray; and, not least, Tom’s discarded cup of ginger tea, swirling and spinning in the froth far below.