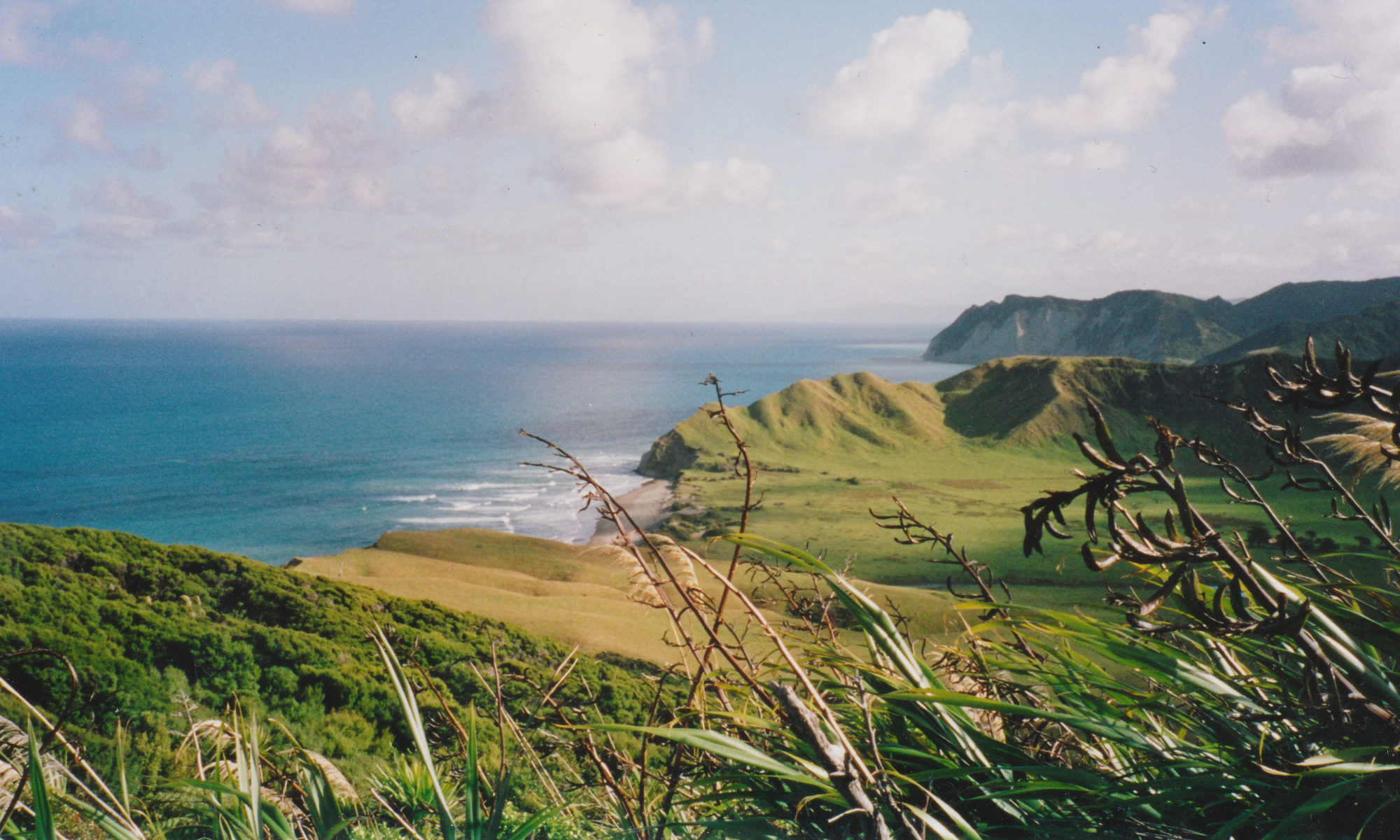 When the sun rises, we’ll see the first tomorrow in the world.

“We on East Cape time now!” says Tane, our driver, as we leave the teal and turquoise Pacific for a track dotted with the scarlet splashes of pohutakawa trees.

“No seatbelts!” mutters Hettie, turning the map upside down. “And where’s the lighthouse?”

“It caved in,” says Tane, “So we stop at Ronnie’s place tonight.”

The two Danish hairdressers glance at their phones as we rattle along, but we lost the signal somewhere between the sulphurous smoke of Rotorua and the glistening slate of Lake Taupo.

“Sorry,” says a bass voice behind me, “You said Regis Palace, ja?”

“Nah, mate,” says Tane to Heinrich. “Ronnie got a farm near Tokomaru. He says we can stay one night, maybe two.”

They did say this was an “informal tour” of the North Island. So far, we’ve delivered the post and had tea with Tane’s mum.

“Are we actually staying here?” murmurs Hettie a few minutes later amid a cluster of dusty farm shacks. “ – No showers? Christ in a pair of flip-flops!”

“What do you think they grow on this farm?” I ask, looking over the thin, tired fields that stretch up to the silent hills. The sun is already sliding.

“This is New Zealand,” says Hettie, “There’s more sheep than people,” but we only see a slight, sunburnt man laying out striped shells on a barbecue grill.

“Ronnie!” says Tane, and the two men gently rub noses in Maori greeting. Ronnie hobbles over to us, a silver hook where his left hand should be. There’s not much of Ronnie left.

“Ronnie’ll teach us how to build a proper fire, eh!” says Tane to Hettie and me.

“They’re Pommies, mate,” calls Tane. “Look at them. So white you need shades.”

“We’ll build a proper Maori fire,” says Ronnie, looking Heinrich up and down. “You start, bro. Go and pick up all those rocks over there.”

“It would be quicker if we all worked together, ja?” asks Heinrich, mildly, staggering under a small pile of boulders.

“The iwi say only one man fit for the task,” answers Ronnie quickly.

When the last stone has been laid, Ronnie draws a bottle out from under his coat and drenches the scattered sticks with whisky. Heinrich lights a match and nearly goes up in flame himself. The fire spits and cracks, and above us, the stars ping out like spilt salt across the autumn sky.

“Girls, try a pipi!” says Tane, passing steamy shells along like little rugby balls, but Hettie shakes her head (“I’m vegetarian”), and the Danish hairdressers sit cross-legged and look the other way.

“What do you do with them?” I ask Tane, who replies by cracking open a shell and sucking the insides out. For a moment, there is nothing but contented crackling under the stars, and then the dog rattles his chain with a bark.

From the dark curve of the hills, the yellow lights of a ute bounce into view.

“Olly!” says Ronnie, crinkling in delight, and turns to us: “I ain’t seen Olly in a long time, eh.”

“Olly been Away?” asks Tane, as the ute pulls in.

“Olly been Away a long time,” says Ronnie. I look at young Olly, who strolls over with a crate of bottles.

“I been Away, eh,” he says by way of explanation.

“Where’ve you been?” I ask, wondering if he’s been in Auckland, or Australia, or maybe the motherland.

“I been in Tolaga Bay,” says Olly proudly.

Tolaga Bay is fourteen kilometres down the road. I guess that’s why they call it East Cape time.

“So guys,” says Olly to the hairdressers, “You ever done the Haka?” and then we find ourselves all in a line (Hettie sits out: “I’m not wearing the right shoes”), Heinrich solemnly slapping his thighs. After Olly’s sword-swallowed a few flaming branches and Tane’s strummed a few chords, we sit with our hands outstretched in the earthy smoke.

“You been good visitors, eh,” says Ronnie, his hook glinting.

“What happened to your hand?” I ask him.

“Really?” I say, waiting for more.

“Ah, he was brave as,” calls Tane, but Ronnie stares into the flames, and when nothing more is forthcoming, I ask him, “Where are your sheep?”

“There’s no sheep here,” he says, leaning into to my ear. “We might farm something else, though.”

He winks at me, makes a hush! sign, and adds in a whisper, “Olly’s father’s a policeman in Hamilton,” as Heinrich sits down, heavily.

“I was married,” says Heinrich.

“What happened?” I ask him. The beer is making the flames all fuzzy.

“Recently?”I ask him, and he says, “Twelve years ago,” and Tane says to the hairdressers, “Love makes the world go round. Ain’t that right, girls?” with a questioning pluck of the guitar strings.

“Love each other man,” says Olly, to the stars.

The hairdresser with the Viking plaits glances at her friend.

“We do love each other,” she says with a shrug.

Olly chokes a little on his beer.

“All men should love each other,” says Ronnie into his whisky bottle.

“Men don’t love me,” says Hettie in a high voice.

There is a pause while Tane plucks some flat chords.

“Ah,” says Ronnie, looking around, “Do you like horses?”

Ronnie gestures vaguely with his hook. “We could ride up the beach. Tomorrow.”

“Are you serious?” asks Hettie, scrambling up in delight.

“May the iwi protect us,” murmurs Ronnie, sprinkling the last drops of whisky over the flames. “Eh, bro,” he adds to Olly, “We need another bottle.”

“You staying up till sunrise?” asks Tane.

“Ah, we staying up till the first tomorrow,” says Ronnie.