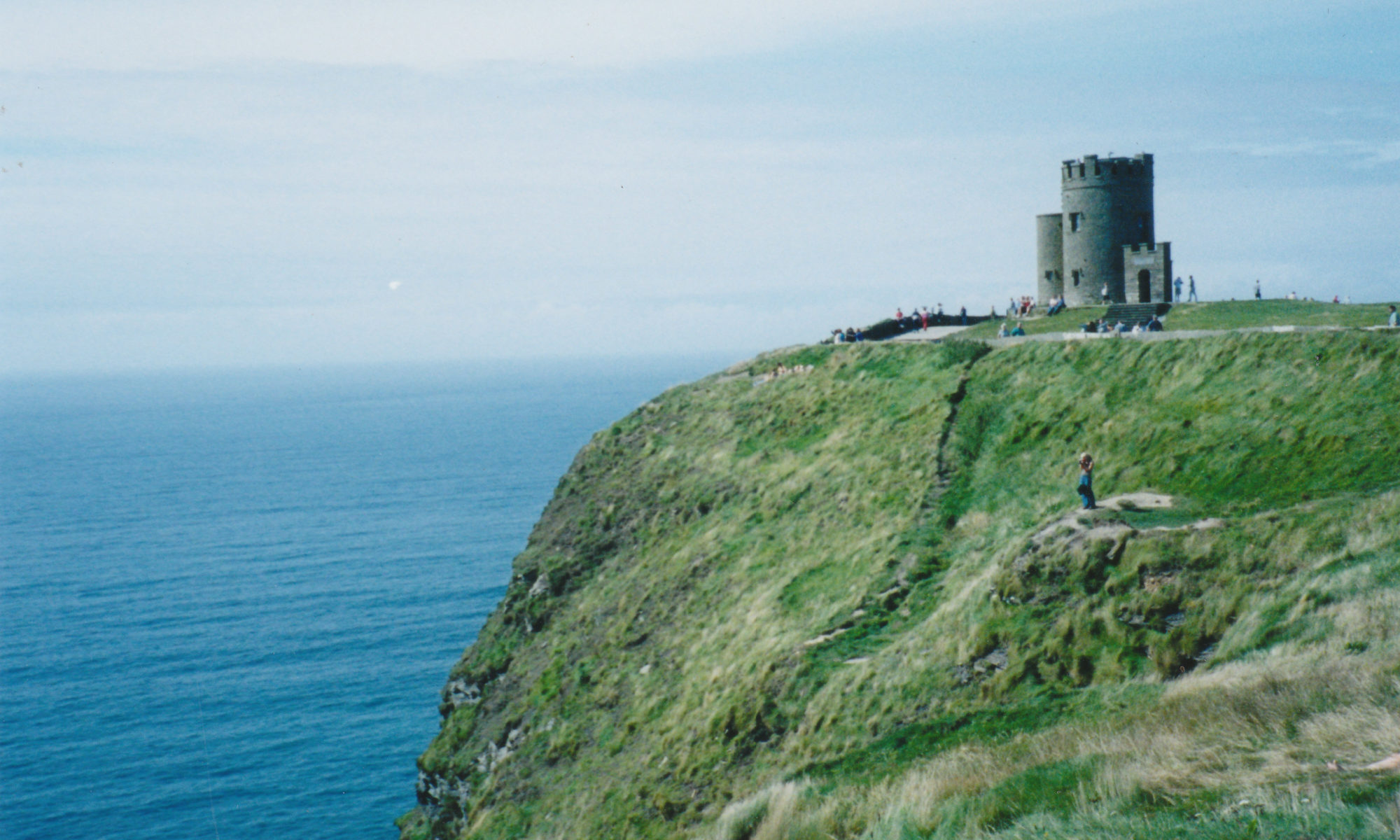 “Sure where’s your cop-on?” asked my mother, “Didn’t we just pass yer man back the road? I’ll hop out now and ask him, so I will. God above tonight and tomorrow, aren’t we all day driving with ye giving out and giving out… “

Now, any fans of Marian Keyes, Father Ted, or the rather lovely Westlife will recognise sprinklings of Irish English in the above exchange. And when I say Irish English, I’m not referring to the indigenous Gaelic language with its Countdown-unfriendly mash-up of letters in words like Taoiseach, céilí, or the ubiquitous Céad mile fáilte (a hundred thousand welcomes) – although incidentally Gaelic is still compulsory in Irish schools, giving the Irish abroad a useful code for mildly insulting anyone in earshot.

Instead I’m referring to the variety of English spoken in Ireland, or more specifically in this article to the variety spoken around Galway on the West Coast where my mother grew up and where we spent many happy childhood holidays. Also known as Hiberno-English, this grammatically and lexically distinct dialect can still leave my English sister and me as linguistically lost as we were physically lost that day. For example, when we introduced my sister’s toddler to a house full of laughing cousins and she hid away timidly, we were met with a chorus of “Is the child strange? She’s a bit strange, so,” meaning, as we worked out, “Is she shy with strangers?”

Wasn’t I after singing “Come on Eileen…”

While Gaelic vocabulary still peppers Irish English speech –  “Arrah what ráiméis is she on about, the leibide! Where’s the mairleógs? Sure th’amadán’s off talking seafóid again, so he is!*” – it’s Gaelic syntax that has played a significant but more subtle role in influencing Irish English speech patterns, which often sound quirky to British ears. “I’ve a job got,” announced a family friend proudly one day, along with “They’d the house redecorated,” and “Had he a drink taken?” (not all in the same conversation).

Then there’s the characteristic use of after to describe recent past events: “I was after going to bed,” (I had just gone to bed) “and didn’t the doorbell ring and put the heart crossways in me…” And as this last sentence shows, the significance of any statement can be judged by whether it has been turned into a question. “Wait ‘til I tell ye,” (Listen to this exciting piece of news – with ye being a wonderfully handy plural form of you), “Didn’t I look up and who was standing there but Eileen, giving out and giving out…”  (complaining enthusiastically). Incidentally, having mentioned the unfortunate Eileen, it’s worth knowing that practically any object judged to be small and sweet in Ireland can take the diminutive suffix –een. Some creative overheard examples are dogeen, purseen, and bageen.

Will I compare thee to a summer’s day…?

“Now, will I get ye a drink?” asks our auntie, leaving us tempted to respond in bemusement, “Well, it’s up to you – will you?” since most British English speakers (with the exception of the Scottish) would use shall rather than will in similar contexts. When it comes to answering questions, the fact that Gaelic lacks direct equivalents to yes and no has influenced the way that many Irish English speakers respond. “Have ye change for the bus?” my Grandma will ask us (dropping the British “got”), and my mother will probably reply “We haven’t – now, are you ready to go?” (And Grandma may reply with the curiously logical “I amn’t!” )

Come Dine With Me, sure

If someone asks you if you’re famished, they’re actually asking if you’re feeling the cold; but one thing’s as sure as God made gooseberries: you’re won’t be in Ireland long before someone offers you something to eat. Make sure you bring a gift for the host so that you don’t turn up with one arm as long as the other, which is generally considered poor form. It’s likely your host will throw wide the door with “Well, ye’re more than welcome!” and urge you to “Sit in, let ye!”, and then spend the evening up and down like a hen on a hot griddle in an effort to keep you continuously fed and watered. Be prepared for repeated cries of “Don’t be shy!” in astonishment if you fail to take a fourth helping of potatoes (even if the dish on offer is Thai curry with rice, although you may well be offered more traditional local delicacies such as white pudding, soda bread, dilisk (seaweed) or –  if you’re very lucky – crubeens (boiled pigs’ trotters)). However, try not to upset your host while you’re still eating, since they could mutter the old Gaelic “Go d’tachta sé thú” or “May it choke you”.

Of course it goes without saying that when the tea’s wet (brewed) you’ll wash it down with a slice or two of brack (fruit cake), and a couple of the rather spectacular Kimberley, Mikado, or Coconut Cream biscuits, which are probably one of Ireland’s best-kept culinary secrets. Servings in Ireland are generous, so even if you started off half-starved you’ll soon be declining with “I’m grand, thanks,” (I’m fine) and may not finish your meal but end up “leaving it after you” on the plate.

One beetle recognises another

The Irish are famously sociable, and while some everyday terms may leave you scratching your head (a press is a (large) cupboard, a boreen is a narrow country road, St Stephen’s Day is Boxing Day, and a yoke can be just about anything) it’s in describing people where Irish English vocabulary takes on a life of its own.

As a schoolgirl I’d have to translate my mother’s descriptions for bewildered friends – if another child is bold they’re naughty, if they’re cute they’re cunning, if they’re gorgeous they’re kind, and if they’re well able to go they’re self-confident. (On the other hand, if they’re just not able (rather than not able to) they’re probably not well.)

If you see a sweet little bábóg or baby you can say “Isn’t she a dote!”, whereas a chubby little boy is the Gaelic word potach (pronounced “putuck”). A calm and contented little child has not a bother on her (or him), whereas one who’s jig-acting or acting the maggot is looking for trouble, and anyone slow on the uptake hasn’t much cop-on.  My Grandma would say of me as a well-behaved child while I sat quietly eating a piece of chocolate Tiffin, “That one would mind mice at a crossroads, so she would,” while my sister jumping up and down to help would be “as handy as a small pot”.  And if two or three similar children are playing together, then an adult might quietly acknowledge that “Aithníonn ciaróg ciaróg eile” – literally “one beetle recognises another”, or in other words, “birds of a feather flock together”.

In between national school (primary school) and the Leaving Cert (A Levels), dotes and potachs inevitably turn into teenagers. If you’re fairly youthful and return home after a good night you may hear “State!”, the short version of “Look at the state of you”, much employed by teens after a night out. This may be followed by “Did you shift him yet?” meaning “Have you snogged him?”. A handy affirmative reply to this could be “I did. What harm?” (“Yes. So what?”) which your friend may acknowledge with “No harm, sure!” (“Fair enough!”). However, if yer man in question is desperate (generally unpleasant) or a bit of a sham (chav), an alternative answer would be “I haven’t a notion,” which translates as “I have absolutely no intention of carrying out your ridiculous proposal.”

What could be more quintessentially Irish than the craic? In fact, the word actually originated in mainland Britain as crack, an informal term for conversation, but was adopted as the craic in Ireland sometime in the 1960s or earlier (for its full etymology see the Oxford English Dictionary).

The craic itself is actually a curiously untranslatable concept. “Sure we’d a grand time altogether – wasn’t the craic mighty,” more or less means “We all sat round together and had a good laugh”. While tea is obligatory on these occasions, alcohol isn’t necessarily so; but remember that if you do go out on the tear (on the tiles) and you’re offered “A pint or a glass?”, a glass is a half-pint.  And hopefully the luck of the Irish will ensure your night out will be great gas altogether (a laugh).

* This roughly translates as: “Goodness, what nonsense is she on about, the idiot! Where’s the rascal? Sure the fool is off talking nonsense again, so he is!”

This article was originally published as Lost in translation…so I was on the Oxford Dictionaries blog, OxfordWords, on November 25, 2011

It was also reprinted in New Zealand’s Christchurch Press on July 25, 2013

One Reply to “[For the Oxford Words blog:] Lost in translation…so I was: adventures in Irish English”