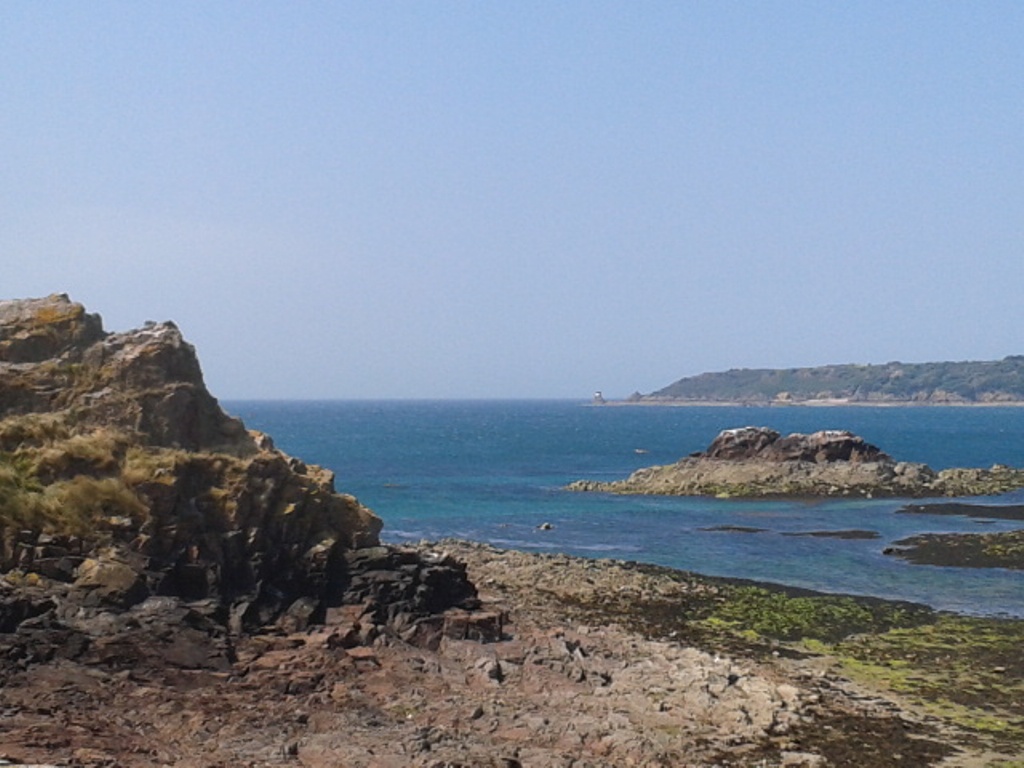 There was one thing I wanted to know as the plane touched down: were we actually abroad? On the one hand, everyone was driving on the left, paying in pounds, and speaking in English (albeit with what sounded like a faintly South African accent). On the other, everything was the wrong colour: yellow telephone boxes, red squirrels, and green pound notes (yes, pound notes – remember them?). As we wound our way through a lush forest of palm trees on the way to the capital, I looked at the bus ticket the driver had given me and saw:

It looked like French; or rather, it looked how French might look through a tropical haze. In fact, it was my first glimpse of real Jèrriais, the native language of Jersey – rich, colourful, and full of quirky phrases. I’m not sure if I ever worked out whether we were actually à l’êtrangi (abroad) or not; but I did learn this handy Monday-morning response to Comme est qu’ tu’es? (How are you?): J’sis coumme eune pouque mouoillie (I feel like a wet bag).

Jèrriais is a distinct form of the old Norman spoken in nearby Normandy (the French mainland is just 14 miles away), which itself developed from Latin with a heavy sprinkling of Norse vocabulary. If you had pulled your baté (boat) ashore on one of Jèrri’s (Jersey’s) wide, golden, palm-fringed grèves (beaches) a century and a half ago as a native English speaker, you would have found yourself in a flourishing and linguistically distinct community where Jèrriais was spoken every day at home, at school, and in the workplace (just as Guernésiais was spoken on neighbouring Guernsey.) But as the twentieth century unfolded, the island’s native language began to gradually give way to Angliais, a process which was already well underway by the time a law was passed in 1912 to establish English as the language of education.

Unexpectedly, Jèrriais came into its own during the wartime occupation of the Channel Islands in 1940-1945, when locals used it to talk to each other without being understood by the Nazis. However, many native speakers were evacuated to Britain during this time, only to return five years later with Yorkshire accents and no desire to revert to their mother tongue. As Jersey’s economy began to grow rapidly in the post-war years thanks to increasingly strong business links with the English-speaking mainland, one particular side-effect of the new prosperity was somewhat inevitable: Jèrriais was becoming a minority language.

So from the mid-twentieth century onwards, local speakers began to be proactive about keeping the language alive, forming networks (such as the Société Jèrriaise) to promote Jèrriais through evening classes, radio broadcasts, and fêtes or Eisteddfods focusing on the common Norman linguistic and cultural heritage shared by Jersey, Guernsey, and mainland Normandy. “We want to keep it as a living language,” explain L’Office du Jèrriais (part of the governmental Dêpartément pouor l’Êducâtion, l’Sport et la Tchultuthe) who have embraced the Întèrnet (with a daily bliogue and lively twitter feed (@le_jerriais)), seeing it as an invaluable way of collating, showcasing, and updating the language: for example, text message abbreviations have been recently added to the online léçons.

However, history may regard the single most significant development in the revival of Jèrriais to be the successful move to start teaching the language at primary school back in 1998, which was so popular that plans have since been mooted to introduce a GCSE in the language.

Nevertheless, despite all these measures, there are au jour d’aniet (these days) still relatively few people who actively speak Jèrriais in addition to English (as there are believed to be no more monolingual speakers left). The number of current active speakers is estimated to be between 1.5% – 3% of the population, although more people are believed to be able to understand it.

You may be wondering if Jèrriais really is a language in its own right, or “just” a dialect. In fact, there are no universally-agreed linguistic criteria for determining what distinguishes the two, and in practice, the factors are usually political: as the linguist Max Weinreich is believed to have said, “A language is a dialect with an army and a navy”. Some linguists do maintain, however, that a language should possess its own literary history, a condition which Jèrriais more than adequately fulfils with a long tradition of poetry and prose which some claim to be able trace back to the twelfth-century chronicler Wace (and now there’s even literature in translation: no prizes for guessing what Alice en Êmèrvil’lie is). A couple of Jèrriais words have even made it into Oxford Dictionaries (the shellfish ormer, for instance). Other linguists look for lexicographic resources such as dictionnaithes of which there are plenty, including a new Dictionnaithe Angliais-Jèrriais published in 2008; there’s even a corrigeux d’êcrithie or digital spellchecker. And officially, Jèrriais already has the status of a “recognised regional language” alongside English and French, which are Jersey’s two official languages.

Jèrriais (which has several dialects of its own) has quite a few words that came from Norse, such as mînchi (to break into small pieces, from the Norse minnka) alongside that other everyday word ouothou (werewolf, from the Norse varúlfr); a small number of words adopted from Breton, such as quédaine (fast); and some words borrowed straight from English such as bisnesse (business) and pozzlé (puzzled). One noticeable idiosyncrasy of Jèrriais is its preference for the “th” sound (technically the voiced dental fricative) where standard French would use “r”, in words such as faithe (faire) and péthe (père).

So you want to help keep Jèrriais alive? The Société Jèrraise has an online phrasebook covering all possible situations you may find yourself in, from L’èrtèrgéthie dé l’heuthe (putting the clocks back) to Faithe la carre (wooing). There’s also a pathole d’aniet, or word of the day. L’Office du Jèrriais offers learning resources in print and CD-ROM format, including Jèrriais for Parents and Grandparents. Of course, a really enjoyable way to learn a language without trying too hard is to sing along, and folk group Badlabecques have some foot-tapping music available: one of the most popular folk songs on the island is called J’ai Pèrdu Ma Femme (I’ve Lost My Wife).

Meanwhile, here are some good old animal idioms to get you started:

This article was originally published as The language of Jersey: little toads and the glove of a queen on the Oxford Dictionaries blog, OxfordWords, on August 6, 2013