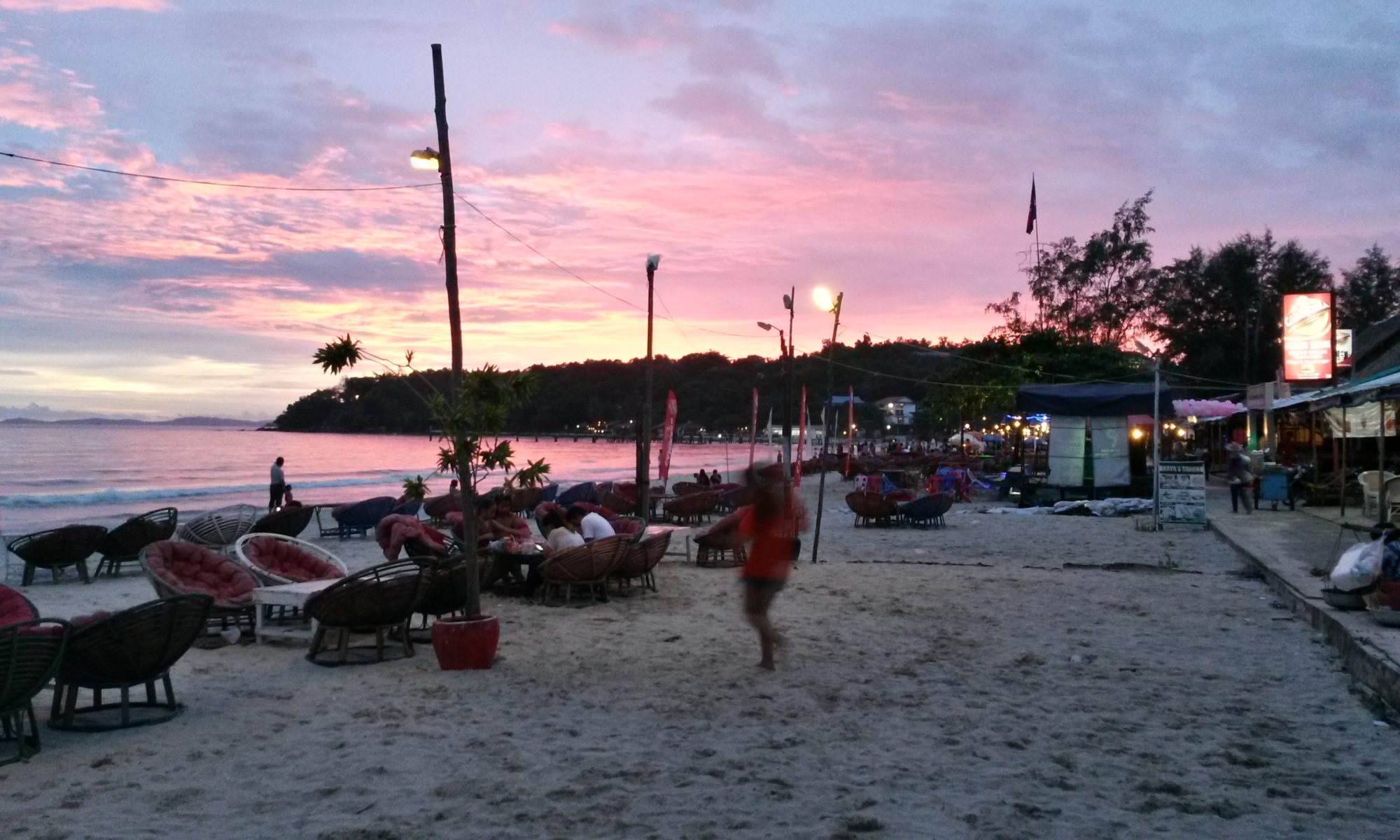 Ten minutes after take-off, our “luxury” bus from Phnom Penh rolls straight into the back of an elderly biker in shades. The old man, whose passenger is a pile of cut grass, starts to loudly demand “many doll-ar!” in compensation. Reality shimmers in the heat, and the traffic begins to flow round us like a shoal of dirty fish. There’s time for an Aussie backpacker to buy and eat a whole dish of pork noodles before we chug on, amid the honking, down the cratered road to the coast.

“Luxury” has many interpretations in Cambodia. The roadside restaurant, lush with lemongrass, has toddlers splashing in the squat toilets. My overnight room in the seaside town of Sihanoukville has dried petals on the pillows and dried bloodstains on the floor. But I’m not staying long: I’m planning to catch a boat out to the peaceful island of Koh Rong Samloem for a digital detox. However, as I’m waiting by the harbour with a couple of stray dogs, the clouds cleave in two and it starts to rain – and rain, hammering down like warm hail. The sea looks seasick.

“Tropical storm,” shouts a dread-locked Australian, “No boats all week!”

“Tropical storm!” mutters a tuk-tuk driver, as a fork of light shatters the sea.

“No room, sista,” she says. There’s an unearthly rumble through the roof.

So I’m stranded in Sihanoukville, squinting at the “Town Rules” through ribbons of rain: “No all kinds of stealing. No traffic accident. No gangster.” As I’m reading it, someone tries to rip open my backpack. I need a safe haven.

I find shelter in a little hotel run by Russians, and in the humid half-light, I spend my holiday lounging under the leaves, eating fresh barracuda and tilapia and red snapper with floating ants. The roar of the rain is relentless, and every now and then the electricity sputters into silence.

Many of the guests are Russian expats who huddle round the tables in the evening, sharp-eyed and shaven-headed. Late one night they suddenly burst into song, shot glasses in the air and bass voices in harmony. At first I imagine it’s a revolutionary anthem, or maybe an Orthodox hymn, but then I recognize the 1970s ballad “Sometimes When We Touch”. I join in, under my breath, against the cymbal crash of thunder.

On my last day, I wake to stillness: the rain has stopped, and the sun’s breaking into a smile. I still have an hour before the bus home to wander down to the beach. The sand is damp, the sea is convalescent, and the shore is a run of fairy-lit shacks.

“Where you from, sista?” calls a canny eleven-year-old. When I tell her, she replies with “Can ya guess where am froam?” – almost convincingly -“I’m froam Glasgae!” while weaving me a friendship bracelet. I sip weak green tea in the sun, and when one particularly insistent woman in a straw hat grabs my hand and repeats that I should really have a manicure, I think, well, what the hell, this is southeast Asia after all.

“Look at this,” tuts the woman, turning my hand over. “If man see this, what he say?”

I look at her. I don’t tell her that if a man were to turn over my hand and say anything at all, then he would get one of those imperfect nails somewhere he didn’t expect.

“Five dollar,” she says. She’s filing away when her silent friend arrives and insists on massaging my feet, while communicating only with her eyes.

“My friend, her husband die,” says the first woman, nodding over. “She my friend long time,” and then jumps up, pins me down bodily in the rattan chair and starts threading my eyebrows furiously, like a surgical procedure.

“If man see you, what he say?” she admonishes, as I writhe beneath her like a baited fish.

I concede she might have a point, and listen to the waves washing in beside us for a few minutes. Then I check my watch.

“I have to go,” I tell the hatted beauticians. The bus for Phnom Penh leaves in – thirteen minutes. “How much do I owe you?”

I start laughing. “Oh ladies,” I say, “I don’t have forty dollars.”

“Forty dollar,” demands the first woman with her hand out.

“Look,” I tell them, “You can have everything I’ve got,” and pull out all my loose notes, piling them up on a rock. “That’s…twenty-seven dollars.”

The wind whips one dollar note away, and the second woman pounces on it.

“Forty dollar!” shouts woman number one angrily, throwing the cash back in my face.

“Hundred dollar you have!” says woman number two in a high voice, having learned English at a stroke. “Change!” she calls, calling for help, “You get change!”

“I’m sorry, ladies!” I say, but they’re enraged. A small crowd quickly gathers – the Glasgae girl, the tuk-tuk driver, the three-legged dog. The women start shaking their fists in the air, so I weave down the beach bars, pursued by a clamouring gang, asking bartender after bearded bartender for help, but they all shake their heads in silence.

“Sorry,” I say to the women, helplessly, “There’s no more I can do,” and run off the beach and over the sewage and up the hill as fast as I can, the three-legged dog yapping after me in Khmer. The “luxury” bus is just pulling up, and I jump on, out of breath, and roll out of Sihanoukville with my eyebrows still stinging.

I check my purse. I still have my hundred dollar note. I’m in Cambodia, after all, where the truth, I’ve learned, has many interpretations too.